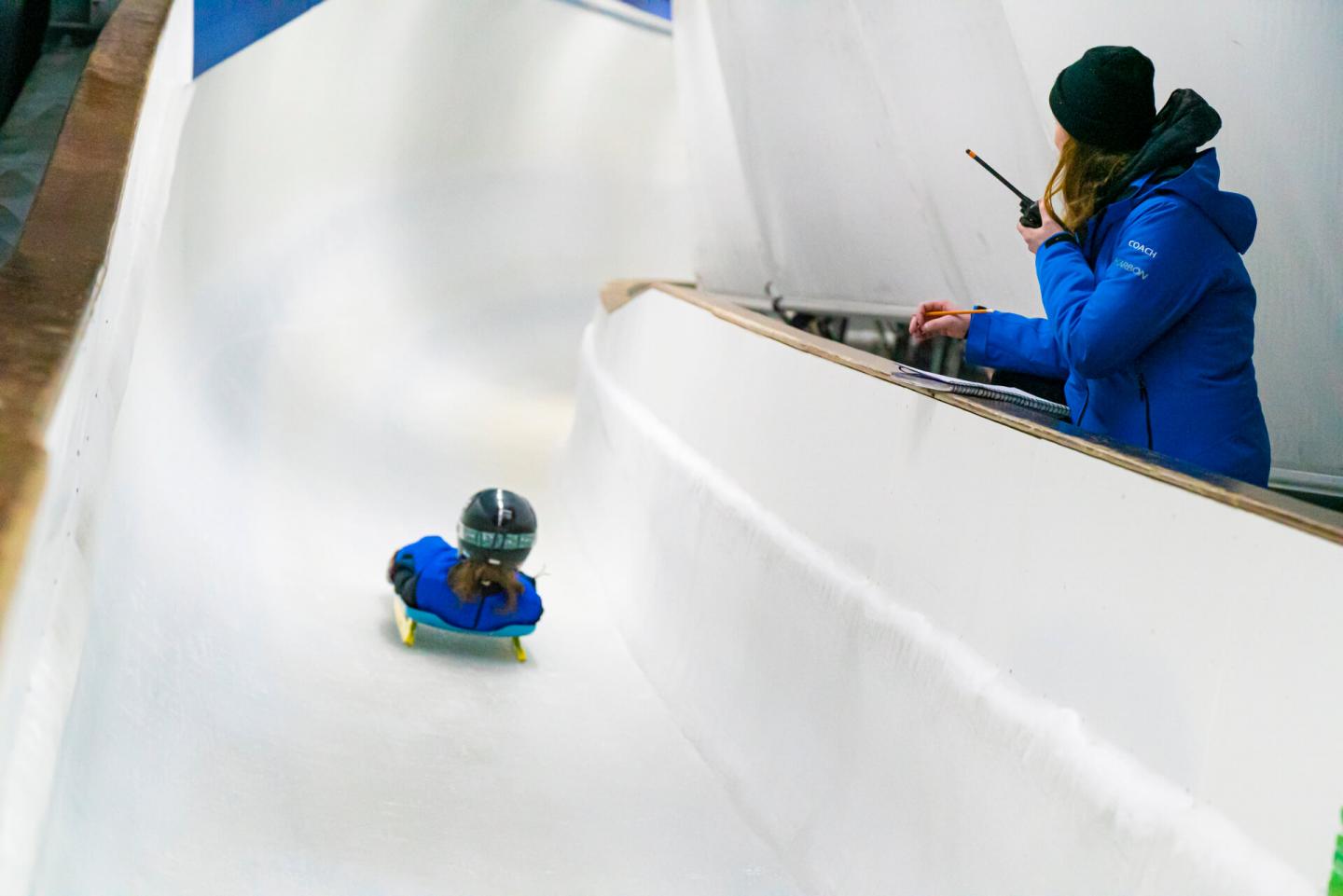 We are proud to have a diverse group of experienced, qualified and passionate coaches who guide our athletes through every step in their progression. Get to know our coaches and their stories below!

If you have questions about the BC Sliding Development Centre, or want to get in touch with one of our coaches, contact us by email! 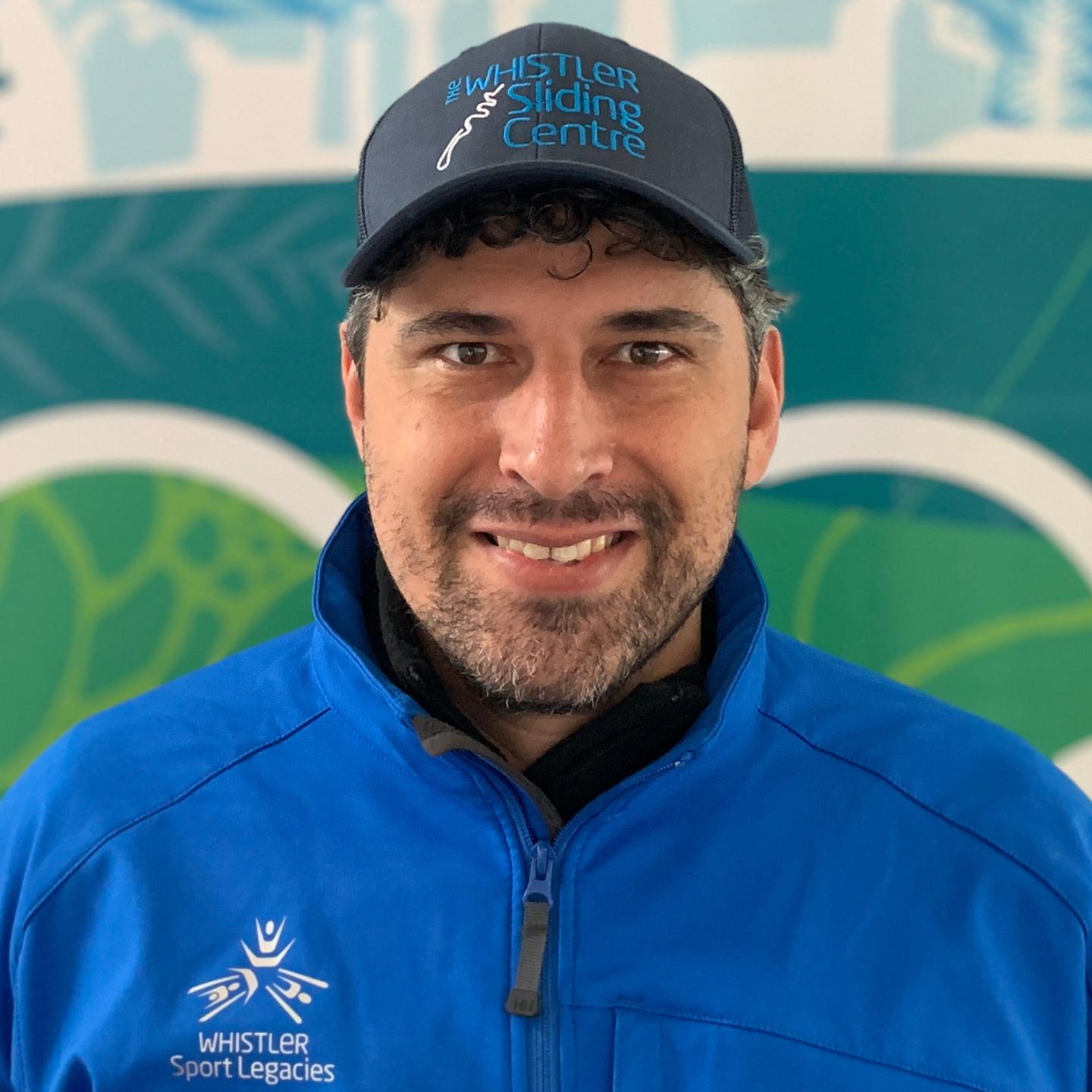 Peter is a two-time Olympian, was part of Bulgaria’s national luge team for eleven years, and raced on 15 different tracks, including Whistler’s, when he competed here during the Games in 2010. Luge fascinates him because while it is a fun adrenaline sport, it is all about natural laws, g-forces and strength. He loves that the sport teaches athletes respect for teammates and rivals, and helps develop athletes’ characters and confidence. Luge for him has always been about sharing experience, knowledge and skills, so after retiring from competition in 2010, he decided to get involved in coaching. As the coach of Bulgaria’s Junior National Team for seven years, he helped athletes qualify for and race at the Olympic Winter Games in Sochi 2014, and he coached athletes for the Youth Olympic Games Innsbruck 2012 and Lillehammer 2016. His coaching philosophy is to provide his athletes with all tools to slide successfully in a positive and safe environment. To achieve this, he not only focuses on building athletes’ sliding skills, strength and knowledge around sled maintenance. He also mentors his athletes in developing a true passion for the sport and for achieving their goals, and teaches them values like respect, responsibility, resilience, empathy, teamwork and sportsmanship. He also has an interest in research around luge training and analyzing technical parameters of the sport, and he was also involved in designing training facilities such as luge ramps. 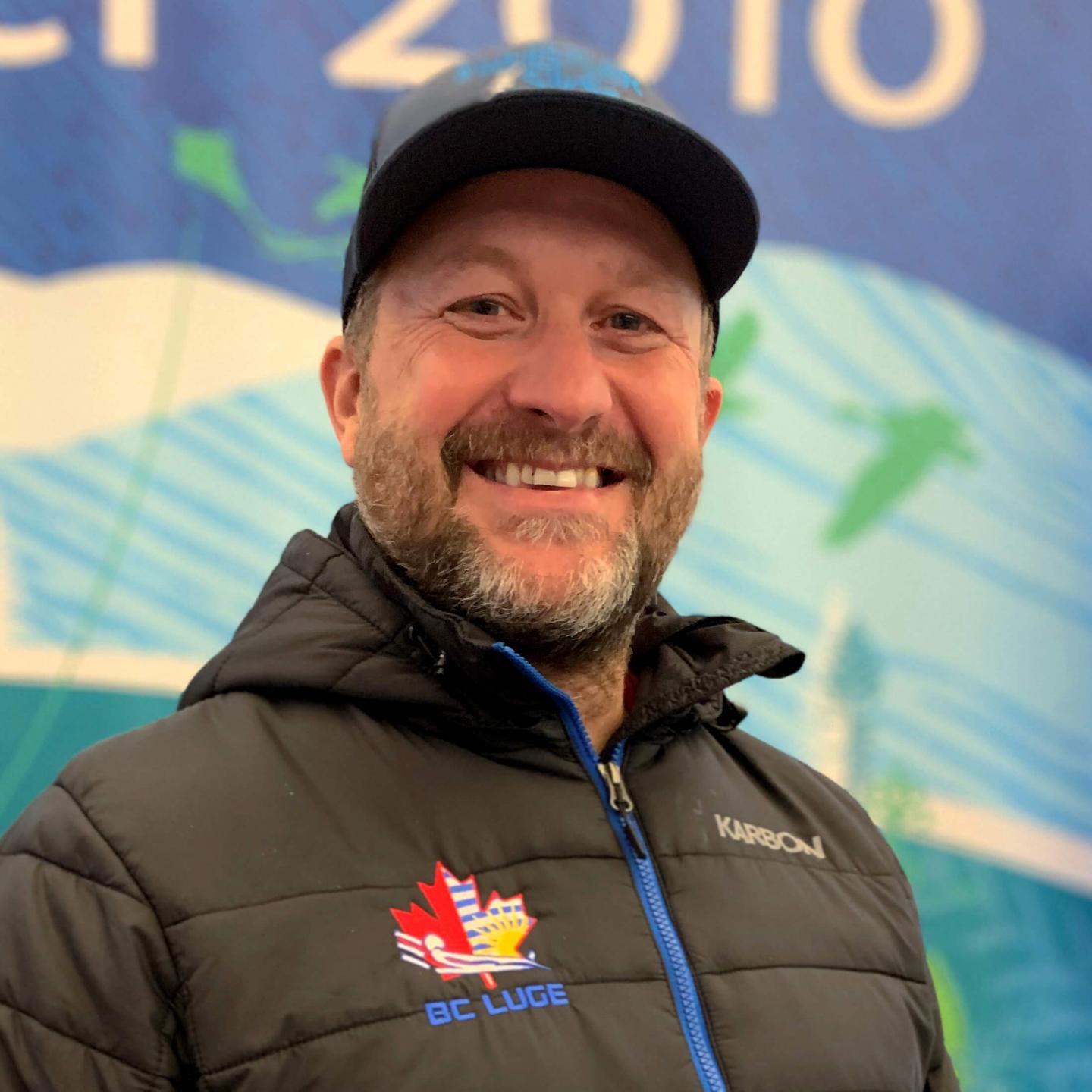 Mark is a 2-time Olympian and has been involved in luge since 1994. Only three years after his first run down an ice track, he became part of the British World Cup team in 1997. He represented Great Britain in the Olympic Winter Games 2002 and 2006. After his retirement in 2007, he moved to Canada to become the Luge Event Manager for the 2010 Olympic Winter Games. After the Games, Mark got involved in coaching and, among others, worked with British, Argentinian and South Korean athletes on the Youth Olympic and Olympic level, and has coached beginners ranging from 6 year-olds up to members of the British Armed Forces. He is the Performance Director of the GB Luge Association and Vice President of the BC Luge Association. His fascination for luge lies in the speed, excitement, g-forces and athleticism, and the two mindsets that athletes must switch between, being aggressive and fired up for the start, and switching instantly to being relaxed and laser focused when in track. He loves coaching and sharing a small part of his athletes’ success and pride in achieving their goals, whether it is athletes becoming Olympians, or children taking their first run down the track. His philosophy for coaching is straightforward: “Have fun, be on time, be honest with yourself and your coaches, look after your equipment, don’t forget to breathe, be detail oriented (because luge is timed to a thousandth of a second!), learn to communicate effectively. And remember that, occasionally, you just need to forget everything, trust yourself and simply get on the sled and go fast.” 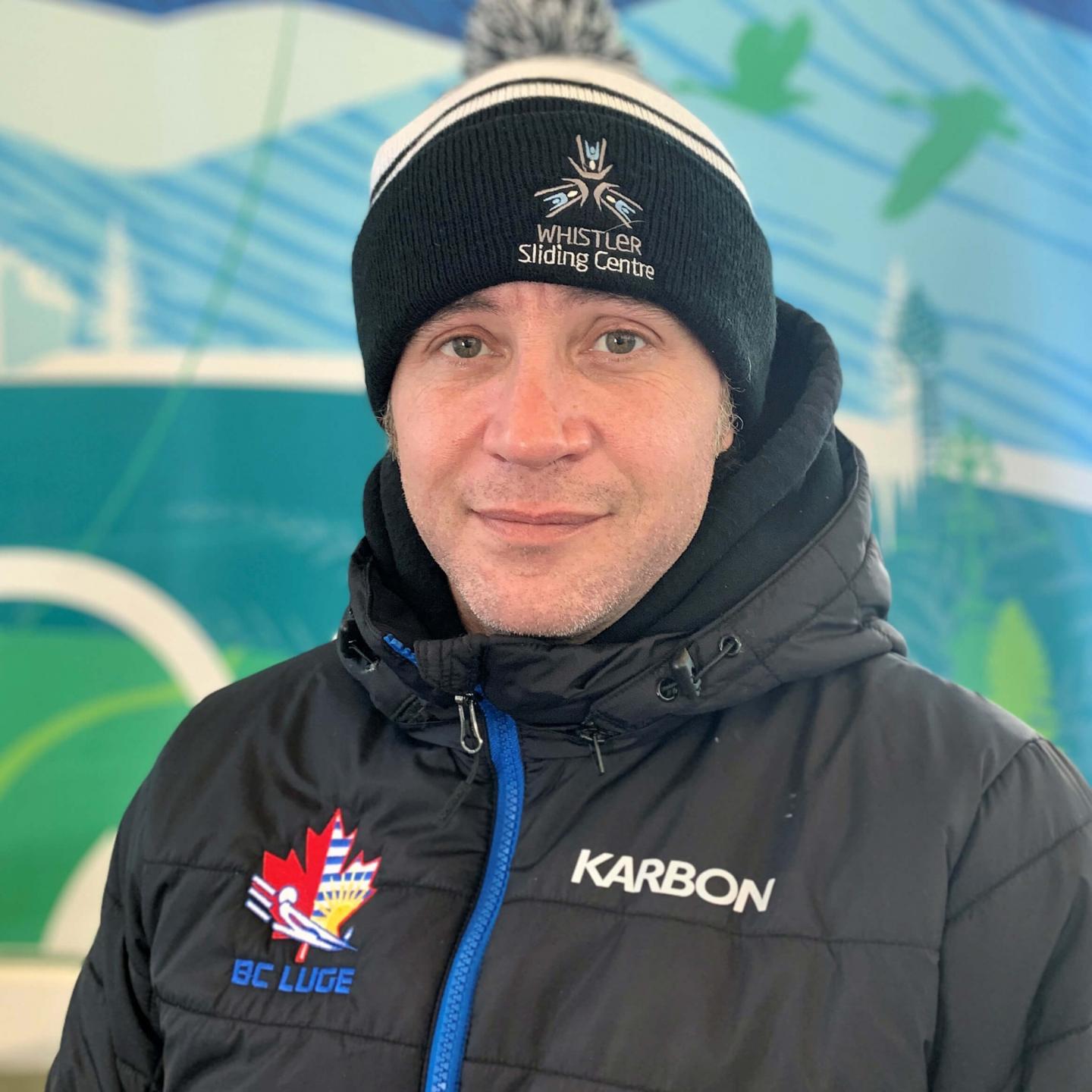 "Snowy" started to work at the Whistler Sliding Centre in 2011. With ten years of experience in ice making and shaping every inch of the track, he knows the ice almost like no other. He has an equal passion for all three sliding sports, and has been involved also as an active athlete, when he piloted bobsleighs on the provincial circuit with the BC Bobsleigh & Skeleton Association. In summer, he pilots the public for the summer bobsleigh activity, and helps train other pilots to drive the summer sleds. During his time with the Whistler Sliding Centre, Snowy has been the first point of contact for many athletes in their introduction to sliding sports, helping with their sleds, assisting at the start and at the finish, and has seen most of the current national team athletes grow up on Whistler’s track, from their very first runs to where they are today. The transition to coaching came rather naturally through his involvement at the track, driven by his passion about all levels of sliding sports, and the wish to introduce as many youth as possible to these unique activities and to spark the same passion and excitement in them. His coaching philosophy is to create a safe, positive, supporting and fun atmosphere for athletes to learn and to achieve their goals. Snowy is also a PMBIA certified mountain bike instructor and coach and teaches youth ages 5-14 on two wheels in summer. 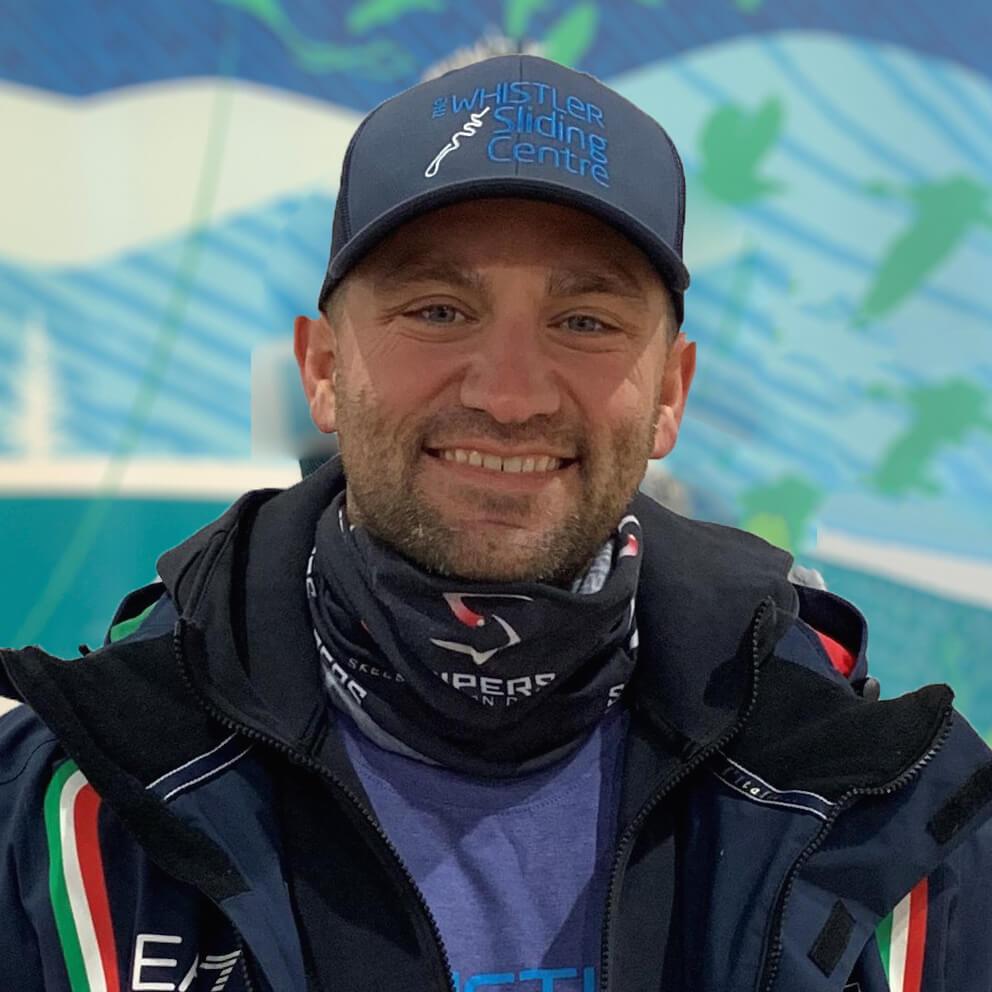 Joe has been passionate about skeleton since 2006 when he watched the Olympic events in Torino. He represented both Canada and Italy internationally, raced on the World Cup circuit for six years, won the national championship title twice and competed at the 2018 Olympic Winter Games in PyeongChang. Sharing his love for skeleton and seeing others experience it means everything to him. He became involved in coaching in 2018, primarily to help support development athletes on their pathway to Canada’s national team. His goal as a coach is to create an environment where his athletes learn the fundamentals of the sport safely and with enjoyment, while building the confidence and skills needed to become competitive skeleton athletes. He does not believe in showing up at the track and doing runs for the sake of doing runs. Instead, with his comprehensive coaching concept, he wants his athletes to slide with purpose and to practice proper techniques to get the most out of every single run. Joe is the current head coach for Italy’s national team, has coached athletes from multiple countries at every level including the World Cup, Youth Olympic Games and Junior World Championships. In December 2021, Joe won the prestigious Bruce Kidd Leadership Award for his contributions to the sport of skeleton in Canada, including innovative training practices and his efforts around recruitment and development. 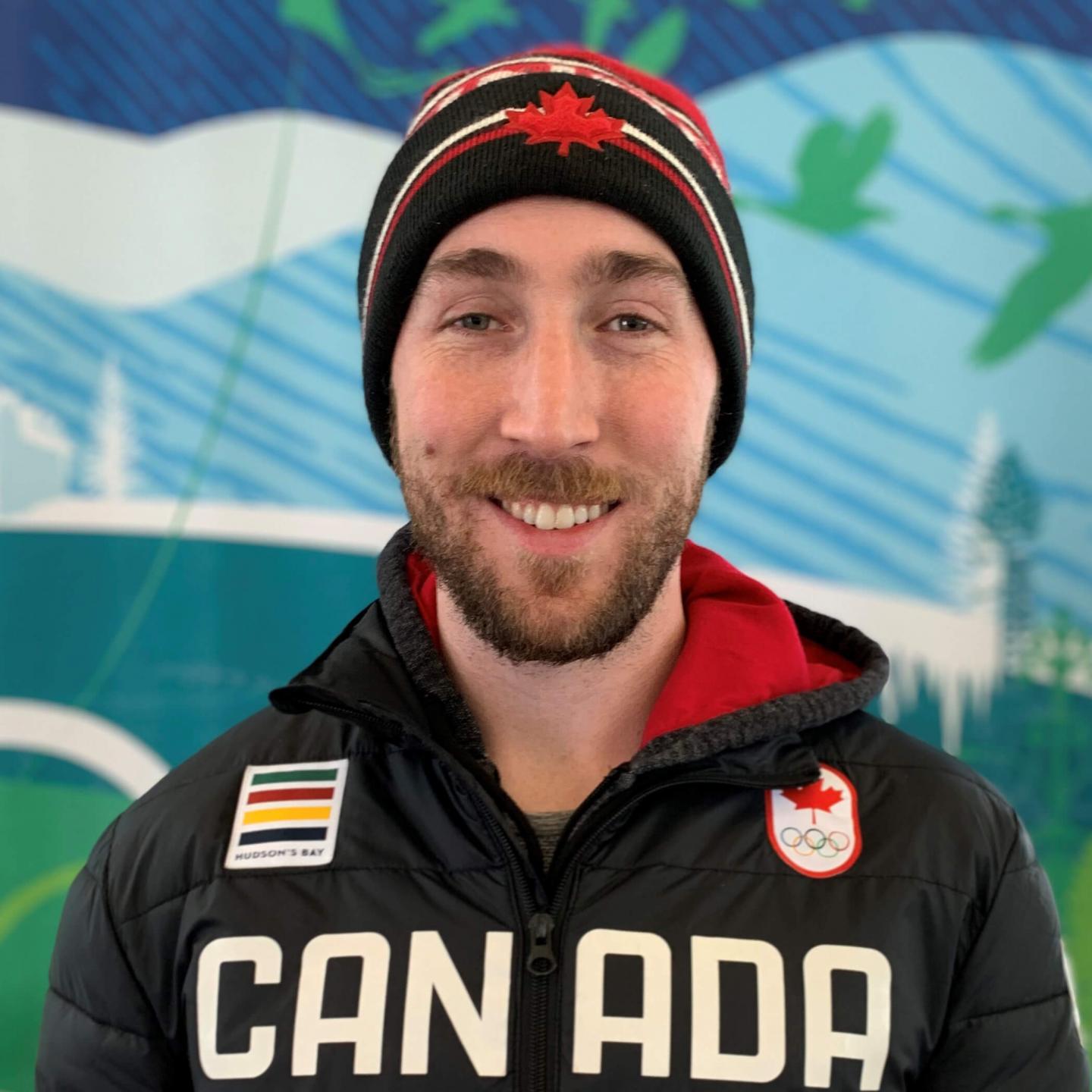 Barrett transitioned to skeleton from a very different winter sport: Nordic combined, the sport that brings together ski jumping and cross country skiing. During his twelve years on snow, he got to be a forejumper in the 2010 Olympic Winter Games. During the Games however, his athletic focus suddenly changed when he witnessed Jon Montgomery win skeleton gold. Barrett decided to transition from snow to ice. In 2012, he competed in his first international skeleton race. He won bronze in the 2012 World Junior Championships, worked his way up into the World Cup team and competed in the Olympic Winter Games in PyeongChang in 2018. He loves the sport, because it allows him to put everything on the line, sliding down the ice at 145 km/hr head first. Skeleton also helped him become an Olympian, a dream he had since he was a young boy. As a coach, he wants to pass on his extensive knowledge to the next generation. Before coaching skeleton, he had already spent multiple years coaching the Canadian ski jumping/Nordic combined team and development athletes leading into the 2014 Olympics. His biggest advice for his athletes: “Never be satisfied, always keep pursuing bigger goals. Don't wait for your time to come, but commit to making your time happen now.” 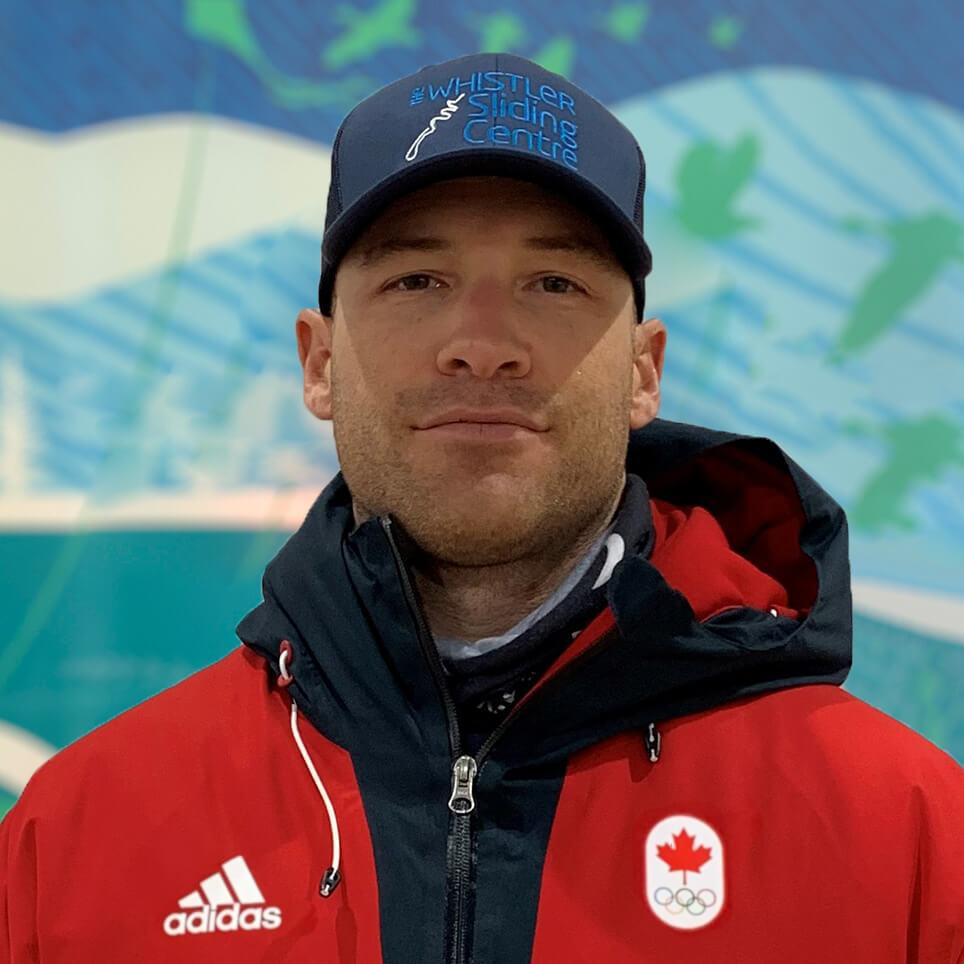 Eric got involved in the sport of skeleton quite late at the age of 25, after trying out at a talent ID camp. He made his first run down an ice track in 2006 and was part of Canada’s national skeleton team program from 2007-2014. He raced on World Cup level from 2011 to 2014 (and placed seventh in his first ever World Cup race!). Eric’s career highlights were a fourth place finish at the IBSF World Championships 2013 in St. Moritz (he also won bronze with the Canadian team at the same championships), and he got to represent Canada at the Olympic Winter Games 2014 in Sochi. The sport of skeleton is a rush like no other for him, involving the finest details to gain a slight advantage. What he likes most about the sport is that while every athlete races solo, all athletes still have to work together as a team to improve. Eric got involved in coaching because he enjoys the sport and loves being at the track, and he wants to make use of his vast knowledge of skeleton and pass it on to athletes coming up in the sport. The most important tip that Eric has for his athletes is to relax and to trust yourself – not much more to add! Eric has coached every level of athlete, from development to World Cup. 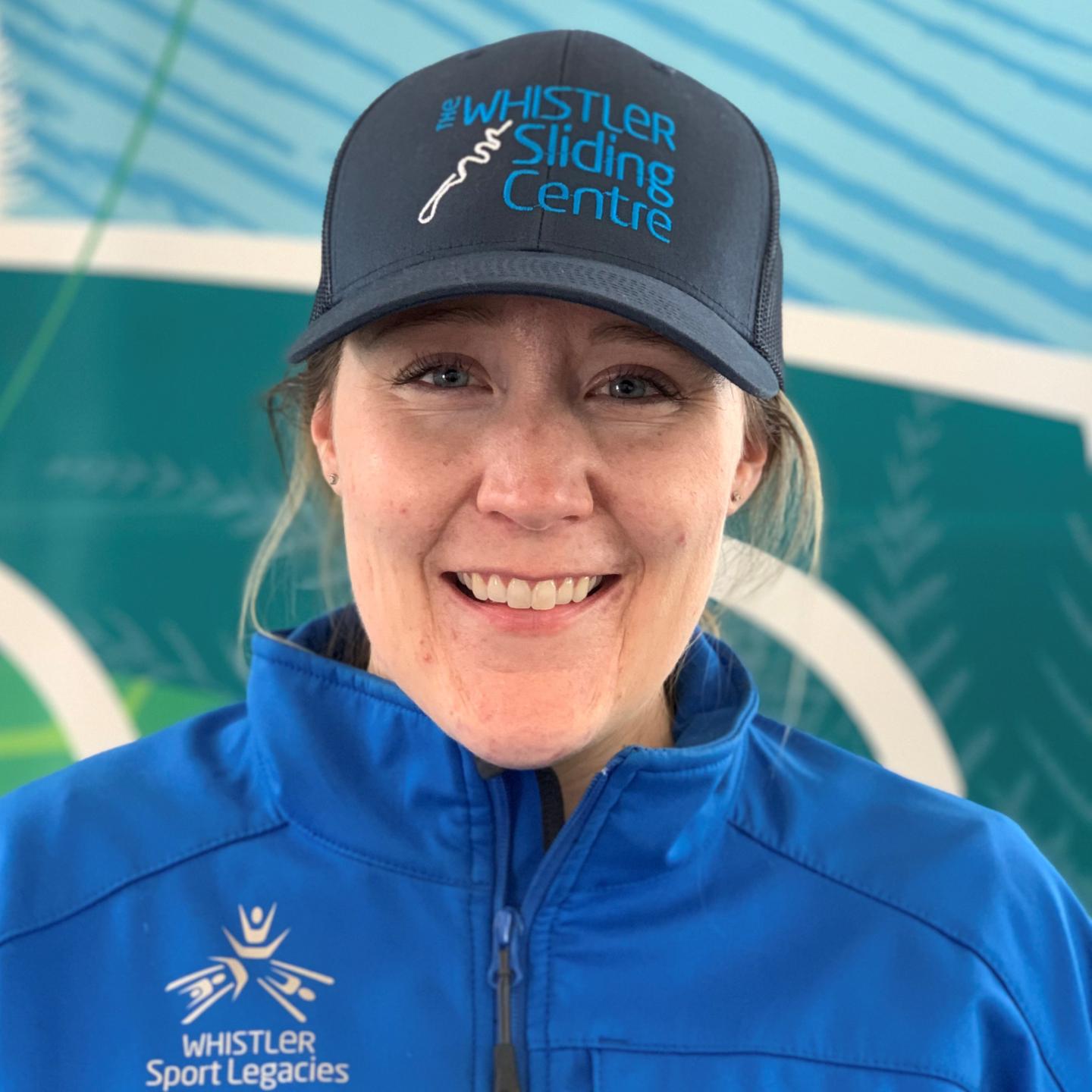 Micaela competed internationally from 2006 to 2016, first for Canada, later for Switzerland up to World Cup and World Championship level. Skeleton allowed her to realize her athletic potential, push her comfort levels and travel the world. It also introduced her to some of her closest friends, and the community spirit and passion for excellence within the sport inspired her right from the start. In 2014, Micaela became involved in coaching with the Alberta Skeleton Association to earn some extra income while still a professional athlete. However, the job quickly turned into a passion. She coached for the Alberta Skeleton Association from 2014 to 2018, was Joe Cecchini’s personal coach for the 2017 & 2019 World Championships, has coached Joe’s Snipers Skeleton team since 2018 and coached Canada’s Youth Olympic Games team in January 2020. Seeing her athletes push themselves and work through challenges inspires her, and keeps her motivated to share her love of skeleton with others. Having fun while staying focused on the tasks ahead is her key to success for skeleton, a philosophy that she passes on to her athletes. She knows the Whistler Sliding Centre well from inside and outside the track, and is excited to support the Progression Camps. 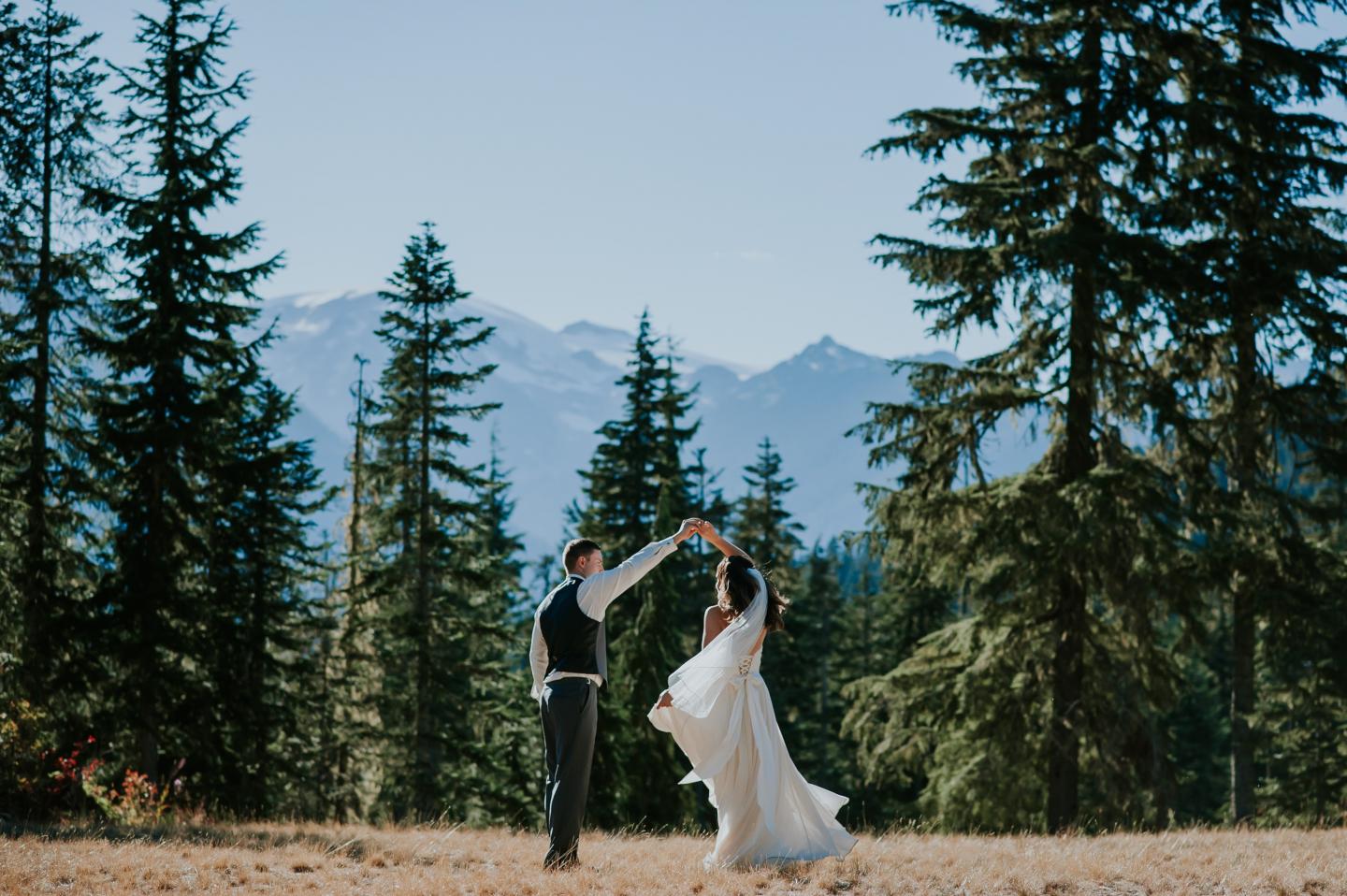 Whistler Sport Legacies gratefully and respectfully acknowledges that we operate on the unceded shared territory of the Skwxwú7mesh (Squamish) Nation and the Lil̓wat7úl (Lil’wat) Nation.